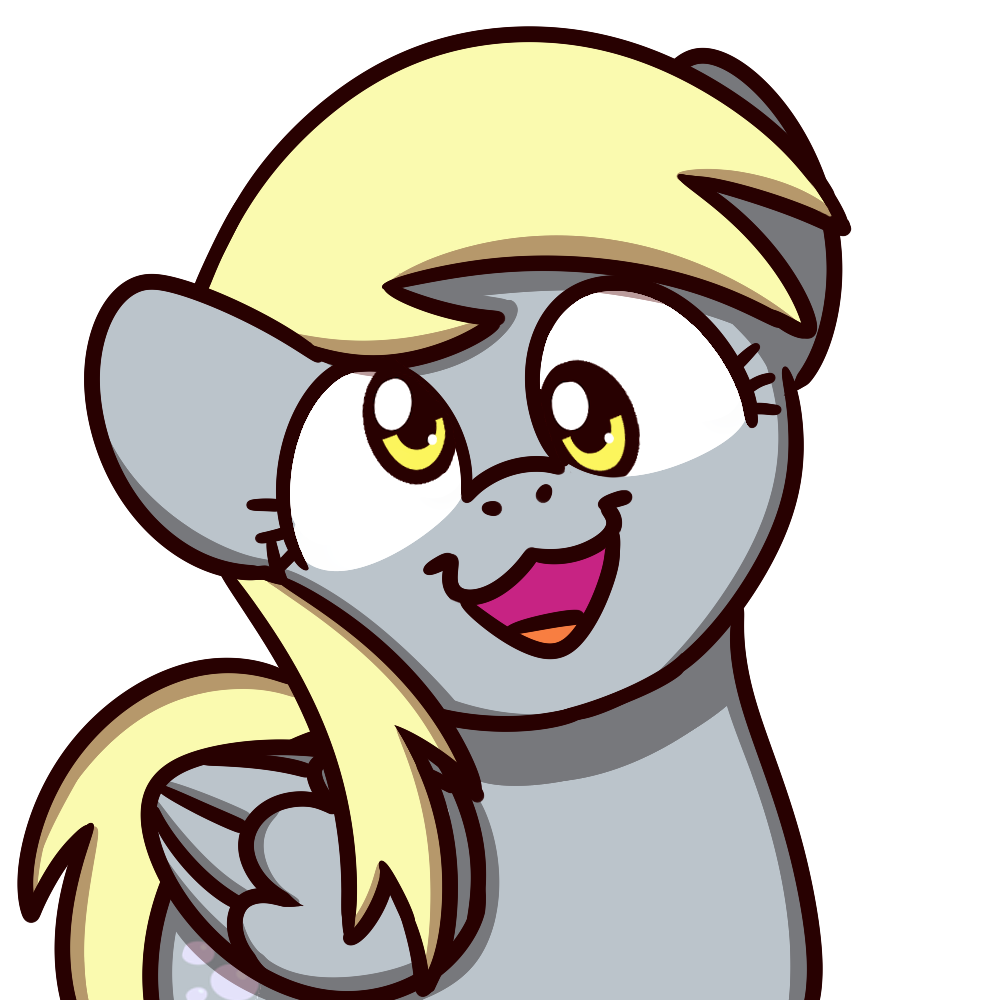 Pope Muffins
Did these two bruhs really have an argument that spans 2 full pages about a funny haha mlp picture?
Posted about a year ago Report
Link Quote Reply

Seems like none of you actually has anything to say anymore at this point except childish games over who has the last word.
Grow up and stop.

Lord of the Empty Seat
@genervt
This argument ended a while ago, and you already lost. Stop trying to restart it.
Posted 1 years ago Report
Link Quote Reply

DUSTY IS BEST CAPTAIN
@Alphamon_Ouryuken
Take your own advice instead of projecting.
Posted 1 years ago Report
Link Quote Reply

Lord of the Empty Seat
@genervt
Not much, all you've proven is that you're good at deviating from the subject and pretending all the bad stuff other characters did doesn't exist or isn't that big of a deal.

Like I said, you want this to end? Quit while you're in last place.

DUSTY IS BEST CAPTAIN
@Alphamon_Ouryuken
I see that you are grasping at straws.
Discussing this any further would be pointless.
I have proved my point often enough.

Lord of the Empty Seat
@genervt

Twilight saved Ponyville, and by extension Trixie since she was within range of getting mauled.

Trixie could have just taken the fact that she didn't have a bill to deal with and let it go, but shr chose to rub more salt in the wound just for shit's and giggles. So yes, she's in the wrong.

And Twilight is well within her rights to leave HER with a bill for damages caused by her, either during the amulet incident, or the stunt she pulled with her table, and if what Pinkie said is any indication, selling backalley unstable and untested fireworks without a permit.

You want this to end? Stop replying.

DUSTY IS BEST CAPTAIN
@Alphamon_Ouryuken
We were talking about Twily.

Corrupted.
Not that hard to understand.

I could say that about you (I am just too nice).

Lord of the Empty Seat
@genervt
Explain exactly how to Trixie "saved" Ponyville when the Ursa Minor attacked. Because in the episode, Twilight literally did all the work while Trixie simply screamed and ran.

Considering the fact that you're justifying Trixie's abuse of power you're not one to talk.

Trixie's in the wrong, your explanation is invalid.

So there is literally nothing more to discuss, you're just making idiotic stuff up as you go.

DUSTY IS BEST CAPTAIN
@Alphamon_Ouryuken
That is just not true.
The episode makes it perfectly clear that Trixie is not herself.

No, she saved Ponyville.

No, Twily is in the wrong.
As I already explained.

You need to stop pretending that abuse of power is justified.

This comic makes it perfectly clear that Trixie has the last laugh.
There is nothing more to say.

Lord of the Empty Seat
@genervt
She sought out the amulet despite its risks, she deals with the consequences. And considering her actions before and after using the amulet, not much was different, she was just more aggressive than usual.

And yes, Twilight did save her from the Ursa. As well as the Amulet itself.

So Trixie's in the wrong for her mouthing off. If she wants to keep pushing Twilight's buttons, she deals with the consequences.

And you need to stop pretending that everyone who acts like a jerk is automatically a saint.

There is a difference between corrupted and being herself.
One has much more responsibility for her actions than the other.

The bill goes to Twily as she is in the wrong here.

You really need to stop telling other people to zip it.

Lord of the Empty Seat
@genervt
She had to learn about the amulet somehow, and was more than willing to dismiss the danger is possessed, then she knew about the risks and thought she was strong enough to handle it (if she's overly self-confident enough to believe she can take credit for beating an ursa, then she's overconfident enough to believe she can surpass a corrupted amulet), again, her ego got her into trouble.

There's the difference between harassing villagers with corrupt Magic and zipping someone's mouth shut for harassing them. One (Trixie) is more drastic than the other.

Also, there's the fact that the reason she got the amulet in the first place was simply because she wanted revenge for Twilight for one-upping her… despite the fact that Twilight saved her life, so we can write ungratefulness and disappropriate retribution to that list as well (plus even after she lost the amulet she tried to cast a spell that make Rainbow Dash writhe in agony, so even then she wanted to assault someone for unjust reasons).

So yes, the bill goes to her.

Now we're done. Unless you want more reasons as to why Trixie's more in the wrong than Twilight, I suggest you zip it.

DUSTY IS BEST CAPTAIN
@Alphamon_Ouryuken
For the very last time, she did not know about the corruption.

Trixie was corrupted, Twily was not.
No excuse for power abuse.

Trixies consequences was a bad reputation.
Not a bill.

Trixie will not be silenced.
And the only bill goes to Twily.

Are we finally done here?

Lord of the Empty Seat
@genervt
Regardless, she shouldn't have sought out such a corrupted amulet to begin with.

If she knew about it, then chances are the books she learned it from mentioned the curse, yet she ignored it. She's egotistical enough to believe she's above that.

All Twily did was zip her mouth shut for mouthing off to her, if she should be held accountable for that then Trixie is to held accountable half the stunt she pulled before and after she got the amulet.

And her own consequences are an even bigger bill.

She can either deal with learning to keep her mouth shut, or get a bill of her own.

DUSTY IS BEST CAPTAIN
@Alphamon_Ouryuken
He told her nothing about corruption.
And she was already corrumpted when she arrived in Ponyville.

No, Twily is at fault for a clear abuse of power.
The consequence is a bill.

And once again Twily is a princess, not a dictator.
She will not get away with such abuse of power.
It would be out of character for her anyway.

Lord of the Empty Seat
@genervt
He told her it was too dangerous. Not to mention the fact that she chose to continuously harass the townsfolk the moment she got there, not to mention our attack people just because Twilight refused to duel with her.

Like I said before, Trixie's more at fault here pretending to not only mock her, but rub salt in the wound at that. If she didn't want to get her mouth zipped shut she would have known better than to taunt someone more powerful than her.

So stop pretending that Trixie is the only one that's not at fault.
And considering the fact that Twilight is in charge of an entire Kingdom, she can easily nullify the bill AND charge Trixie for damages regardless.

DUSTY IS BEST CAPTAIN
@Alphamon_Ouryuken
Corrupted.
It is not her fault that the salespony didn´t warn her.

Twily decided to abuse her power, now she deals with the consequences.
Either she learns to controll her temper and not to lash out at ponies when something doesn´t goes her way or there will be many bills in the future (and not only from Trixie).

By the way, Trixie is not responsible for a whole kingdom.

Lord of the Empty Seat
@genervt
Sounds more like you're the one who's victim-blaming considering the fact that you're ignoring all the characters who had to suffer because Trixie didn't bother to do more research on the amulet she was searching for.

Trixie decided to talk smack, therefore she deals with the consequences. If she wants to suddenly throw a bill her way, then she's going to have to deal with the ramifications of her own magic induced temper tantrum.

Either she learns not to provoke someone more powerful than her, or she can look forward to getting her mouth zipped shut a lot.

And considering her ego, she's failed that test a lot more times than Twilight ever could.

DUSTY IS BEST CAPTAIN
@Alphamon_Ouryuken
There was no mentioning of corruption.
As far as she knows the salespony just wanted to drive the price up.

And now you are victim blaming.

As long as Twily doesn´t learn not to abuse her power she is not fit to rule Equestria.
If this was a test she would have failed.

Lord of the Empty Seat
@genervt
She was warned that it was dangerous. She should have researched more before wearing it.

If she doesn't want to get her mouth zipped shut Trixie will have to learn not to provoke someone with Superior Magic by taunting them.

That shouldn't be too much to ask for.

Especially for someone who has already had that kind of attitude bite her in the ass more than once.

DUSTY IS BEST CAPTAIN
@Alphamon_Ouryuken
The was corrupted and she had not idea that this would happen.
And she proved herself in the finale of season 6.

If Twily does not want to pay more bills she will have to stop to abuse her power.
That should not be too much to ask for.
Especially for a princess.

Lord of the Empty Seat
@genervt
Her "excuse" is that she took pity on Trixie and let her off with a slap on the wrist when she could have easily pressed charges for her own abuse of magic (and don't give me that she was possessed nonsense, Trixie sought out the amulet herself).

So compared to that, Trixie getting her mouth zipped shut is a minor problem, when did she could have avoided if she hadn't decided to mouth off to/mock Twilight.

So if Trixie wants to throw a bill her way, Twilight can easily throw a bill at her for all the damages she caused.